Bushey Cemetery, opened over 50 years ago, is among the UK's most significant Jewish cemeteries.

The Elliott Wood structural engineers worked closely with the Waugh Thistleton architects and the United Synagogue to deliver the two new simple yet striking prayer halls along with a series of service buildings, across 16 acres of land. The extension has increased the capacity of the site from 43,000 to 60,000 graves, part of an ongoing process of further develop the cemetery for the community to continue to honour and remember those who have passed away.

In this feature we showcase the rammed earth walls, utilising earth from the site via an ancient, sustainable and durable building method.

As a construction technique, rammed earth has been used for centuries around the world, however it is relatively unused and unknown in the UK. It consists of compacting, or ‘ramming’, a moistened mixture of soils into a formwork which, when dried, forms a dense, monolithic wall. Adding lime or cement into the mix improves strength and durability over time - this is known as Stabilised Rammed Earth (SRE).

To construct the seven-metre-high and half-a-metre thick ceremonial walls at Bushey Cemetery, the civil and structural engineers at Elliott Wood worked with Earth Structures, an Australian rammed earth construction specialist firm. The early involvement of specialists meant that any potential drawbacks of the material or construction process could be addressed. Given that there is no official design standard for rammed earth, the engineering team had to justify the proposed design through very thorough repeat testing. Strength, durability, colour and texture were explored to provide a bespoke solution for the project. 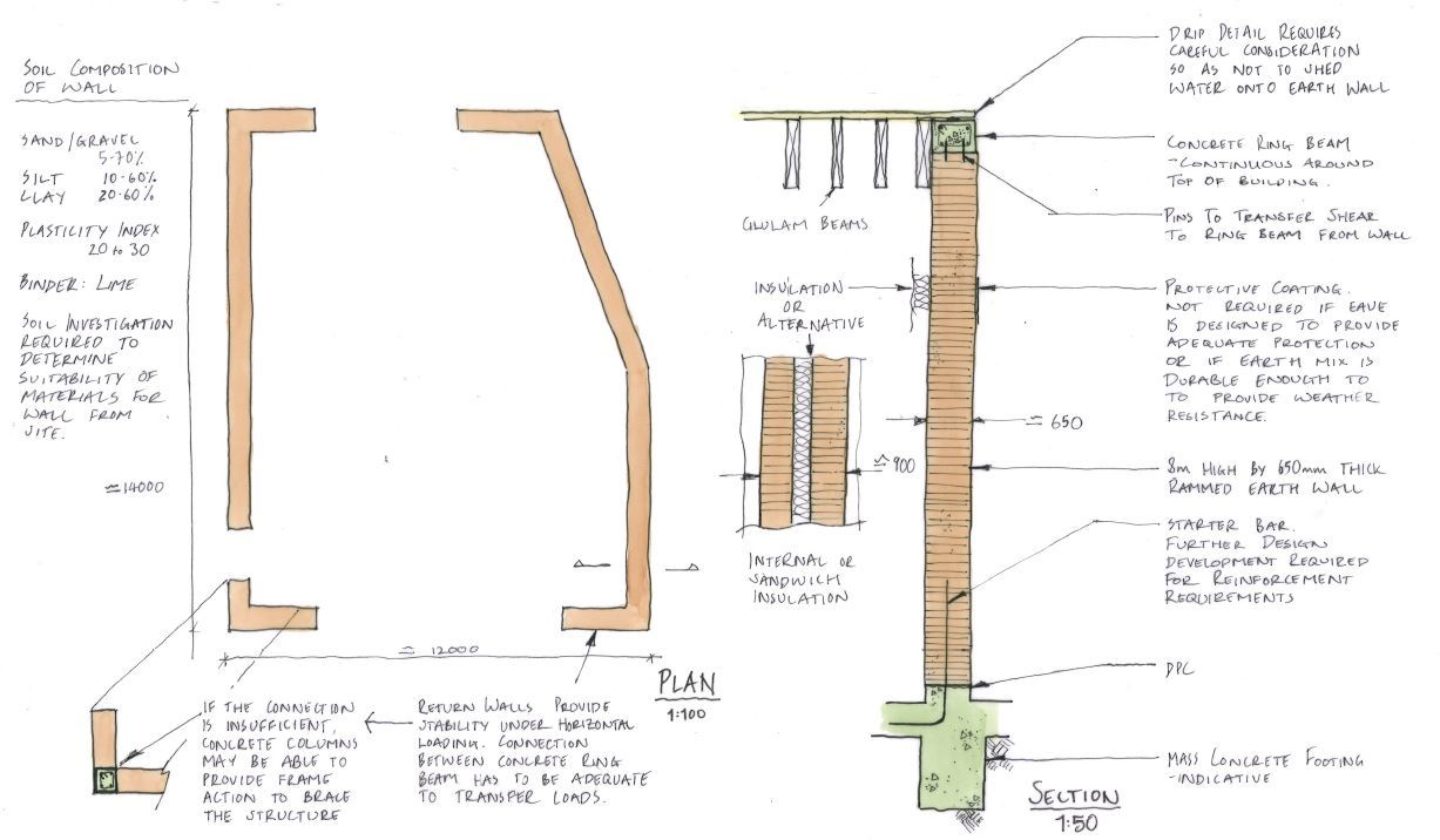 Choosing the correct soil mix is crucial to the success of the technique. The aim of the mix, combined with the compaction method, is generally to maximise the resulting dry density of the wall, and therefore its strength and durability.

The key constituents of the mix are:

Coarse Aggregates and Sands
Soils are classified based on their particle size, with clay having the smallest particles, increasing through silts, sands and then gravels. Sands and gravels make up the largest proportion of the soil mix, generally 50-80%, and the maximum particle size for rammed earth is generally limited to 20mm (medium gravel).

Binder Material
The type of binder used affects the proportion of clay that is acceptable. In unstabilised rammed earth, a higher clay content is used to act as the binding agent. Clays with lower plasticity are preferred to avoid excessive shrinkage during the drying of the structure. When exposed to moisture, however, the binding effect of the clay is lost, as the material loses its strength and becomes susceptible to erosion. This is only suitable for arid areas, otherwise requiring coatings and regular maintenance.

Where lime or cement is added to form SRE, the clay content is reduced while the sand and gravel content is increased to ensure the water in the mix is available for hydration. A cement content of around 7% by weight is typical, less than half the proportion generally used in concrete.

Water
A particular mix will have an optimum water content that is dependent on the method of compaction and which maximises the dry density. For SRE, the water content is typically 7-10% and is judged by “adding water until the mix will hold together when squeezed in the hand - but not leave a colour stain on the hand”. It is important that the water contains minimal salt and organic matter.

Plasticiser
A plasticising additive reduces the water absorption of the finished wall, as well as increasing its strength by improving workability at lower water contents.

At Bushey Cemetery, the scale of the 7m high walls, and the desire to keep much of the rammed earth walls exposed to the elements meant that cement SRE was chosen. 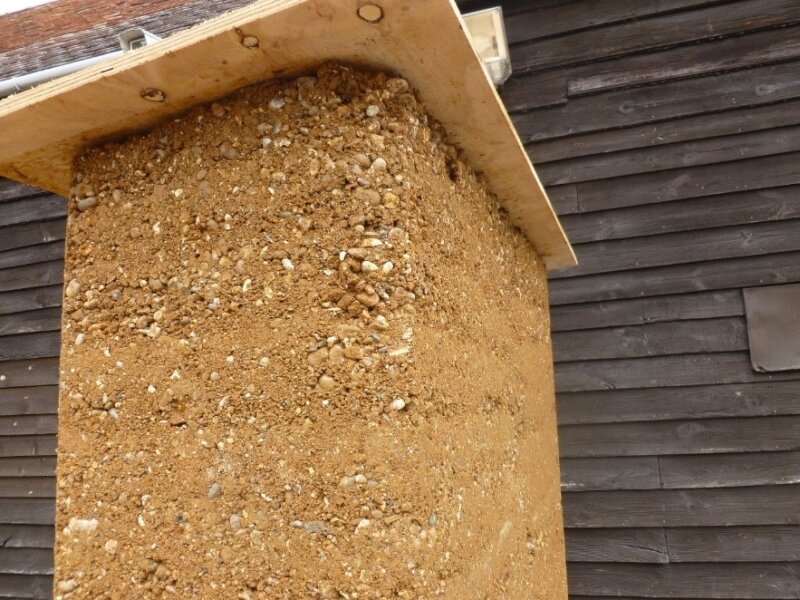 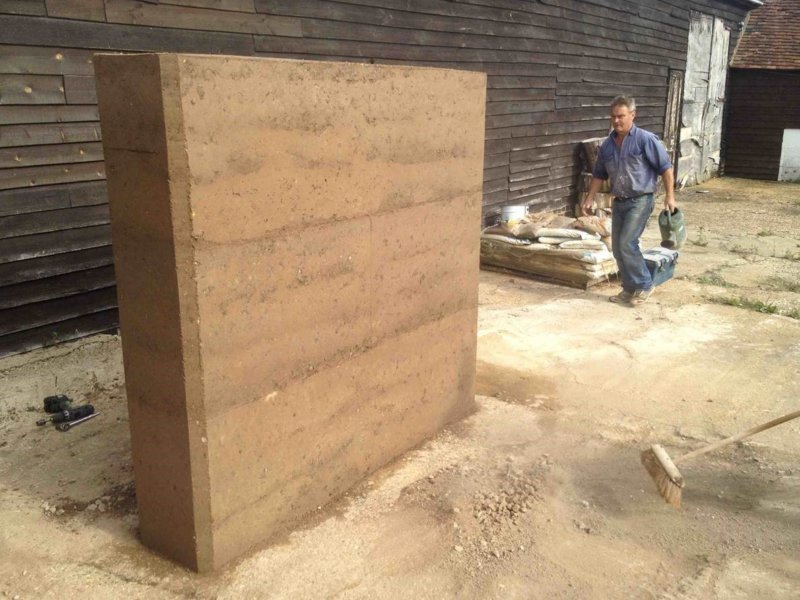 A number of test samples were produced, using a variety of locally sourced materials and assessed on the basis of colour, surface finish and strength. A test panel was then constructed using the chosen mix, and left exposed on site to test its weathering performance. The proportions were then tweaked to produce the final recipe: 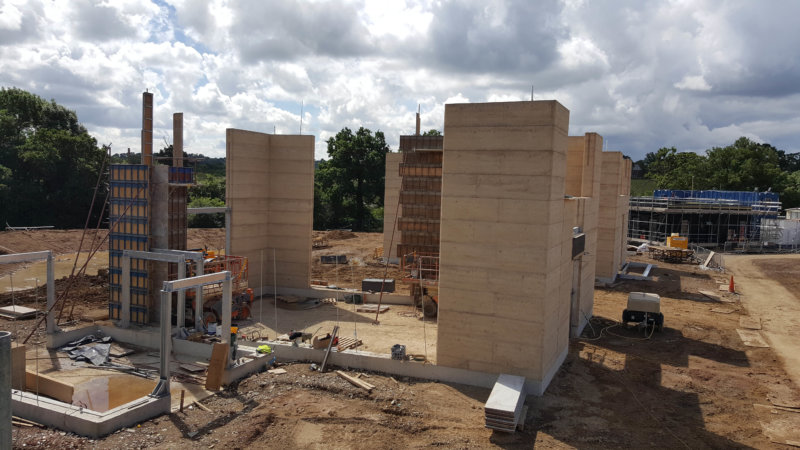 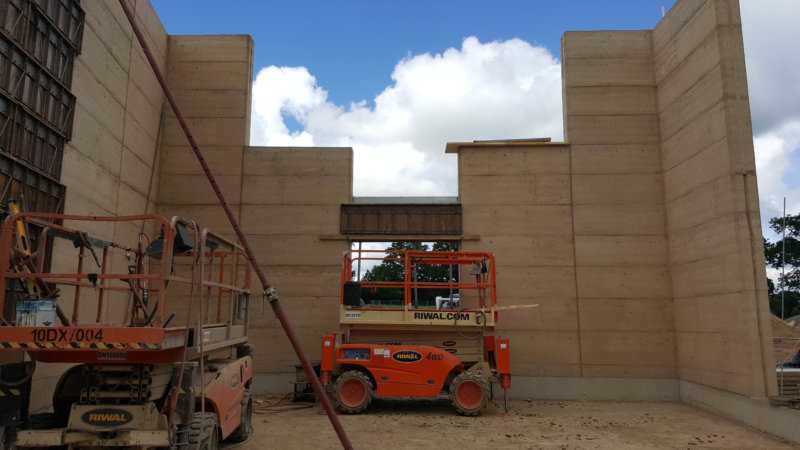 The specialists’ involvement went as far as living on site for the month and half it took to build the walls, ensuring from a close distance that the finished product was of the highest quality.

A reinforced concrete ground floor slab was cast with a visual concrete upstand, acting as a guide for the formwork and to protect the rammed earth from erosion within the ‘splash zone’ at the base of the wall.

The earth mix was then compacted into the formwork with pneumatic rammers in 600mm thick layers, matching the height of the formwork panels, which were then added incrementally to allow access for ramming. This process introduces horizontal formwork lines and tie-holes, as well as natural colour variation between the rammed sections.

Vertical expansion joints were specified to prevent cracking of the walls during the initial drying phase and to accommodate thermal expansion caused by exposure both internally and externally. The spacing of the joints was matched with the width of the subcontractor’s formwork, and emphasised with chamfered arises to ensure a crisp finish.

Openings
Doorways and windows were inserted within this grid of vertical and horizontal joints to avoid the need for formwork adaptions and therefore speed up construction. Galvanised steel lintels were embedded within the walls during the ramming process, the steel goal-post frames being required to take the weight of 3.5m high Cor-ten clad doors.

Strength and Stability
Compressive strengths in the range of 5-10 N/mm2 were achieved, verified by regular cube testing to ensure consistency (for comparison, concrete generally achieves 30-40 N/mm2). To take into account the inherent variability of the mix and construction method, material safety factors ranging from 3.0–6.0 are suitable for SRE, dependent on the testing and supervision regimes and the experience of the constructor.

The strength of the wall in tension cannot be relied upon without extensive testing, so it was ignored within the structural design. With the movement joints requiring the walls to span vertically between the RC base and timber roof, the resistance to bending from wind loading is therefore reliant on the dead load and self-weight of the wall to ensure tension does not develop. In reinforced concrete, the low tensile strength is overcome with the addition of steel reinforcing bars. However, due to the unreliability of the bond between the bars and rammed earth, these were not used to provide long-term strength. Considering slenderness limits, the 7m high walls were achieved at just 400mm thick.

Connections
As a variable material, testing was required to prove the capacity of fixings into the wall. Bespoke tests were specified to provide design information for the resin-fixed bolts supporting the timber roof, wall finishes and rooflights. 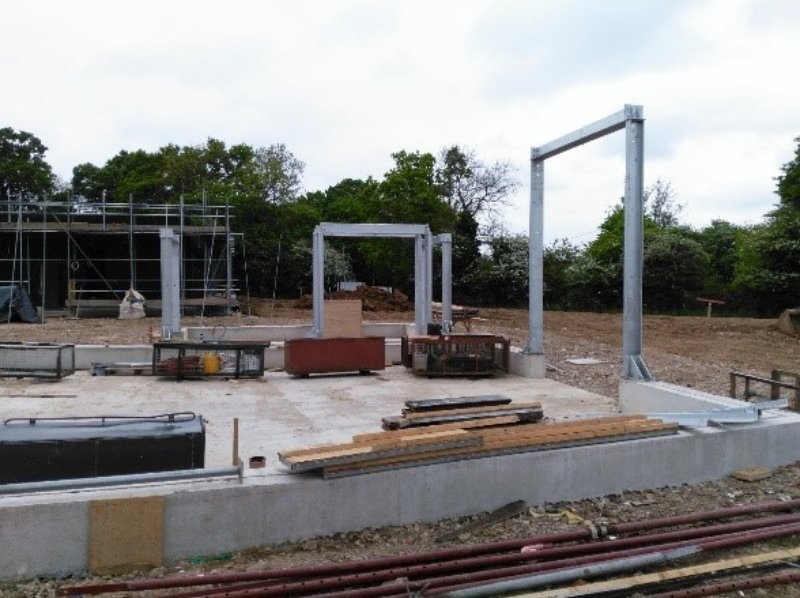 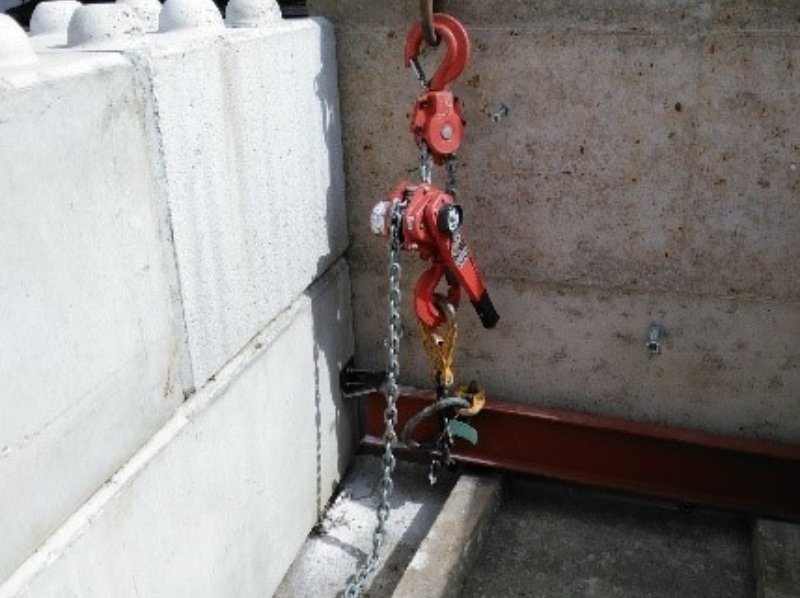 Within the ceremonial spaces of the prayer halls, the rammed earth has been left exposed, showing its inherent imperfections and giving the space a unique character. Different shades of the materials are visible in the stratification across its surface, and the 150mm layers of ramming sections can be seen as well, adding to the bare yet elegant aesthetic. While this external façade is solemn and austere, once inside the atmosphere is calm, inviting yet private, softened further by the use of timber and indirect soft light.

Unlike a perfectly poured and polished concrete wall, the rammed earth technique gives the Bushey Cemetery and Prayer Halls a unique character, a sense of sombre, calm beauty. Another plus of using this material is the noise attenuation effect, which amplifies the tranquil yet solemn atmosphere required by funereal ceremonies. 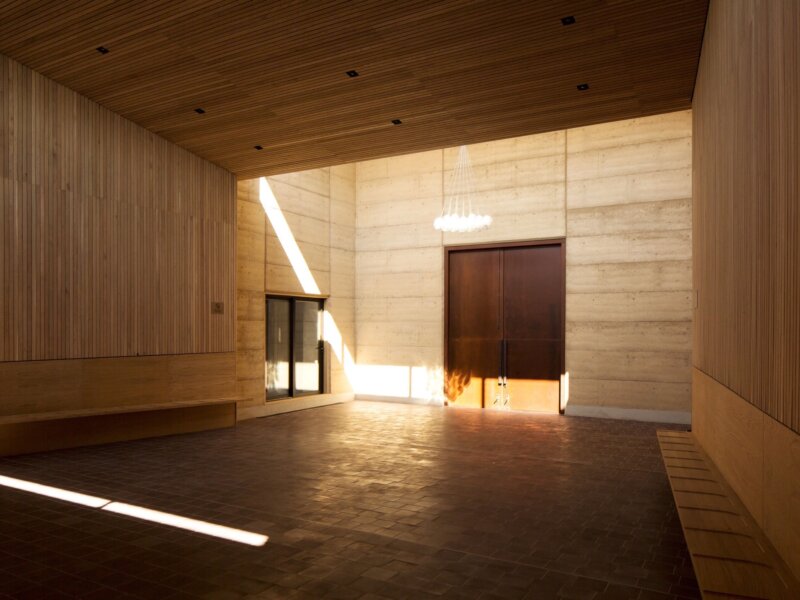 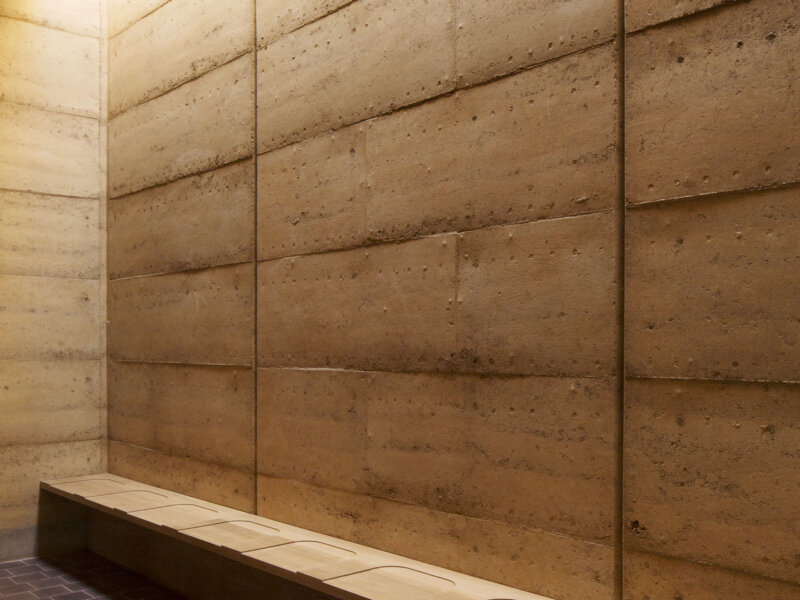 The use of rammed earth comes with strong sustainability credentials, including the time and cost efficiency of locally sourcing the raw materials and its manual construction methods. It uses significantly fewer natural resources than fired bricks or concrete walling. The material is also breathable and has a temperature stabilising effect. Given this and considering that the buildings were designed as sheltered external spaces, no insulation was required in addition to the material’s inherent high degree of thermal mass. The technique is likely to become increasingly popular and important for low carbon building.

The rammed earth walls designed by the Elliott Wood team reflect the makers’ craft in building them, utilising locally sourced materials through an ancient, sustainable and durable building method. Echoing the return to earth of the body, once all these new graves have been taken and the halls are no longer needed, the structures above ground have been carefully specified to be demounted and recycled, returning to the ground from which they came from, a fitting parallel to the human condition.

We are delighted that the project has been awarded the RIBA East Award 2018, the RIBA National Award 2018, and Best Completed Religious Building at the 2017 World Architecture Festival, along with it being shortlisted for the 2018 RIBA Stirling Prize.

You can read Architecture’s Journal Stirling Prize feature here and take a look at the BBC Arts feature here.