As part of the Wandsworth Arts Fringe, Pump House Gallery commissioned Elliott Wood and NEON architects to deliver a temporary pavilion installed on the gallery forecourt. The structure was realised through working with arts specialist students from Chestnut Grove Academy in Balham, who’s inspiring and vivid minds were a key component in helping to conceive the pavilion design.

The aspiration was for the designers to make a site-specific response and explore the relationship between the Pump House, the park and the temporary pavilion. Adjacent to the park’s 3-hectare lake, the Grade II listed former Pump House tower was built in 1861 to house a coal-fired steam engine and pump to circulate water in the lake, water the park’s plants and drive artificial rockwork cascades situated on the north bank of the lake.

The aim with this project was to demonstrate how art and design together with the STEM subjects (science, technology, engineering and mathematics) could deliver creative opportunities for young people in Wandsworth. We engaged with pupils from Chestnut Grove in the creation of the pavilion, exposing them to the realities of an architectural project and the different roles required in deliver them. 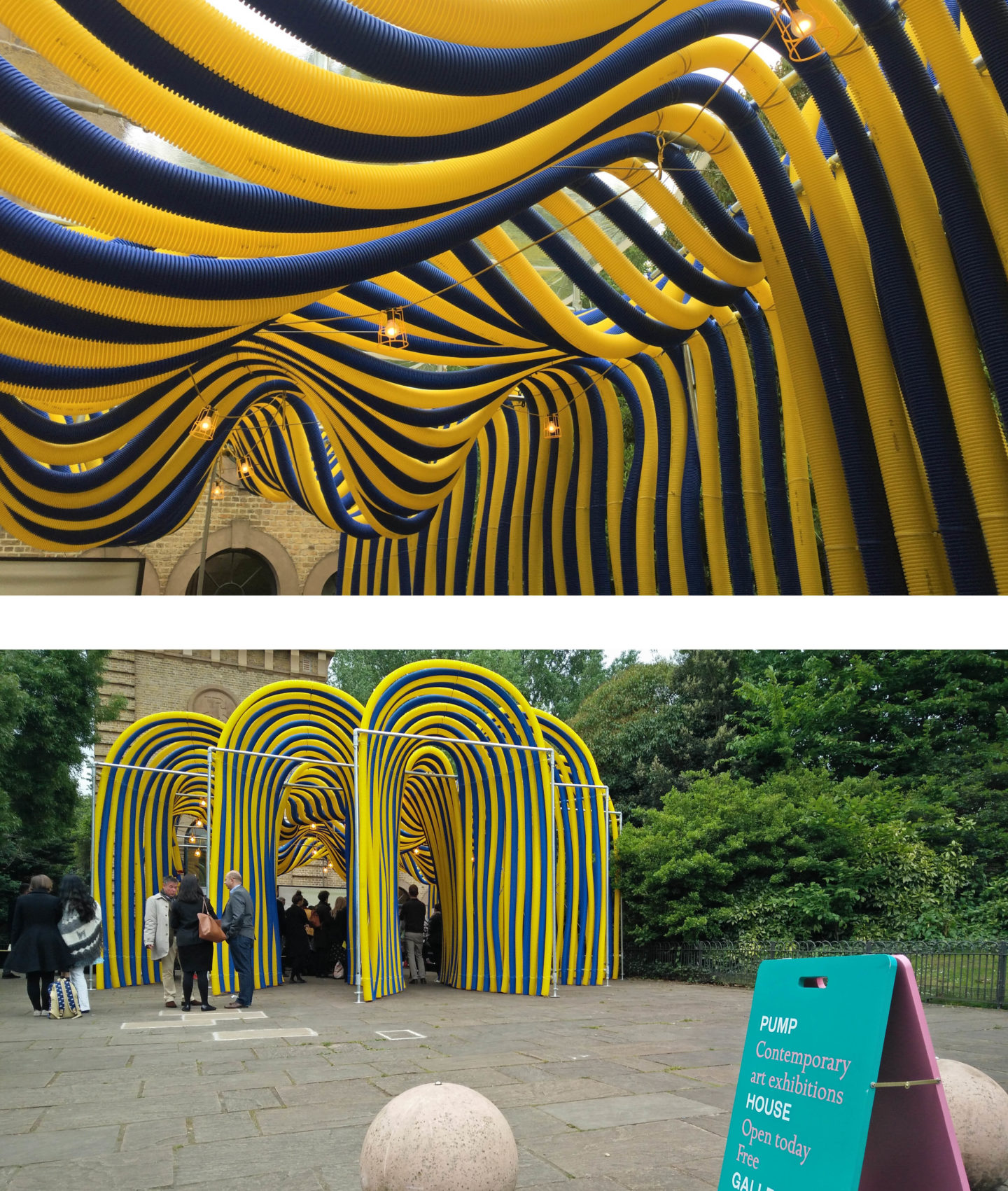 The students of Chestnut Grove Academy took part in various design workshops; from site visits to discover the history and context of the site, the people and animals in it and the environment that forms it. The students explored the fundamentals of structures and the languages of architecture through a series of creative construction exercises. These workshops allowed the students to test and refine ideas for the pavilion that were at once complex and exciting as well as practical and realisable.

In recognition of the construction site surrounding Battersea Park, Elliott Wood and NEON used simple day-to-day construction elements. The pavilion combines flexible pipes arranged in an organic form with a scaffold framework, which makes the forces and function of the structural elements visible. The pavilion has been realised using the state-of-the-art parametric modelling to push such simple materials to their limits.

The pavilion celebrates the pipes that used to flow from the Pump House out into Battersea Park. The architectural form is created through a series of repeated distorting arches, designed to reference the classic brick arch, including the iconic front entrance of the Pump House. The students suggested a form that would lead people in and encourage a sense exploration. Different coloured pipes are used to create a hypnotic “op-art” effect, intended to lure the public into the pavilion. Inside the Pavilion spools for storing pipes are used to form seating and tables to further celebrate the use of everyday construction materials.

Battersea Pavilion, it’s open to the public until the 21st May as part of the Wandsworth Arts Fringe.

Elliott Wood uses parametric design as an optimisation tool, as a process driven system rather than object driven system, it is highly transferrable. It frees up the ‘engineering’ and interrogation of schemes by processing the repeatable tasks and data into easily manageable tasks.

We ran iterative form-finding analyses to optimise member lengths into easily cut groups. Whilst it was an incredibly complex geometry from a digital perspective, we were able to converge on a solution that meant it took simple manual labour and no more than 1.5days to plan out and erect the frame. All the fabrication information was generated from the scripting, true digital-to-fabrication, to be repeatable but appear to be random. 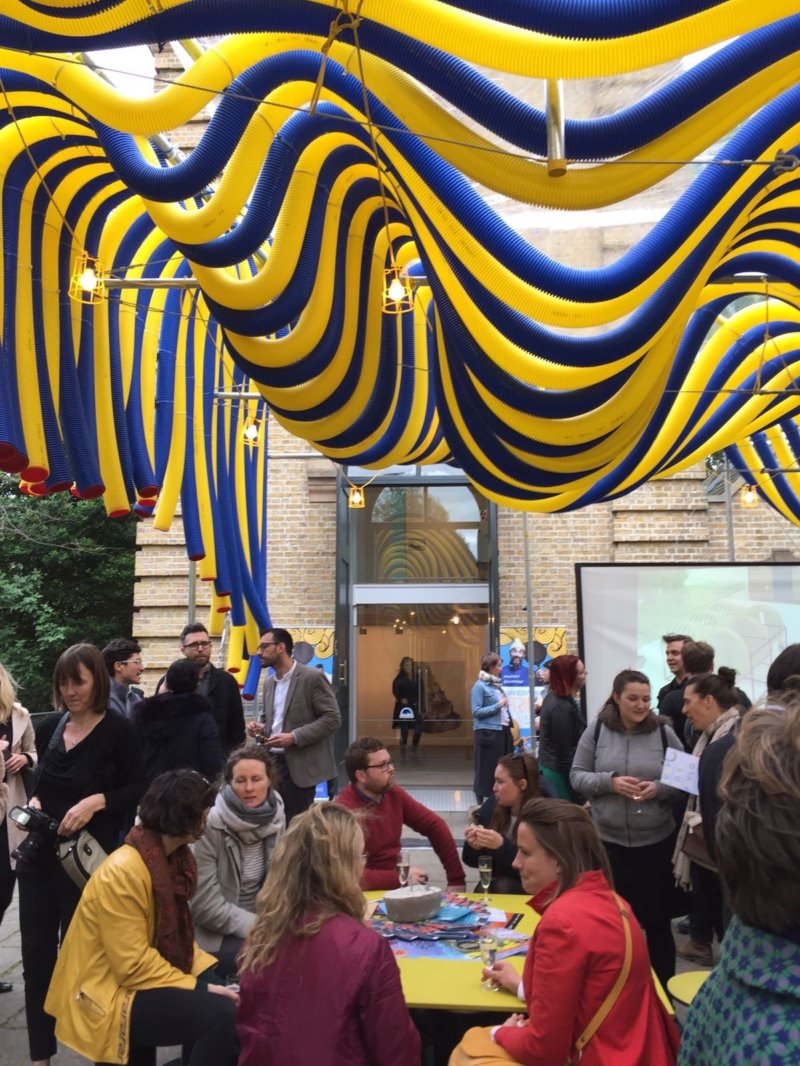 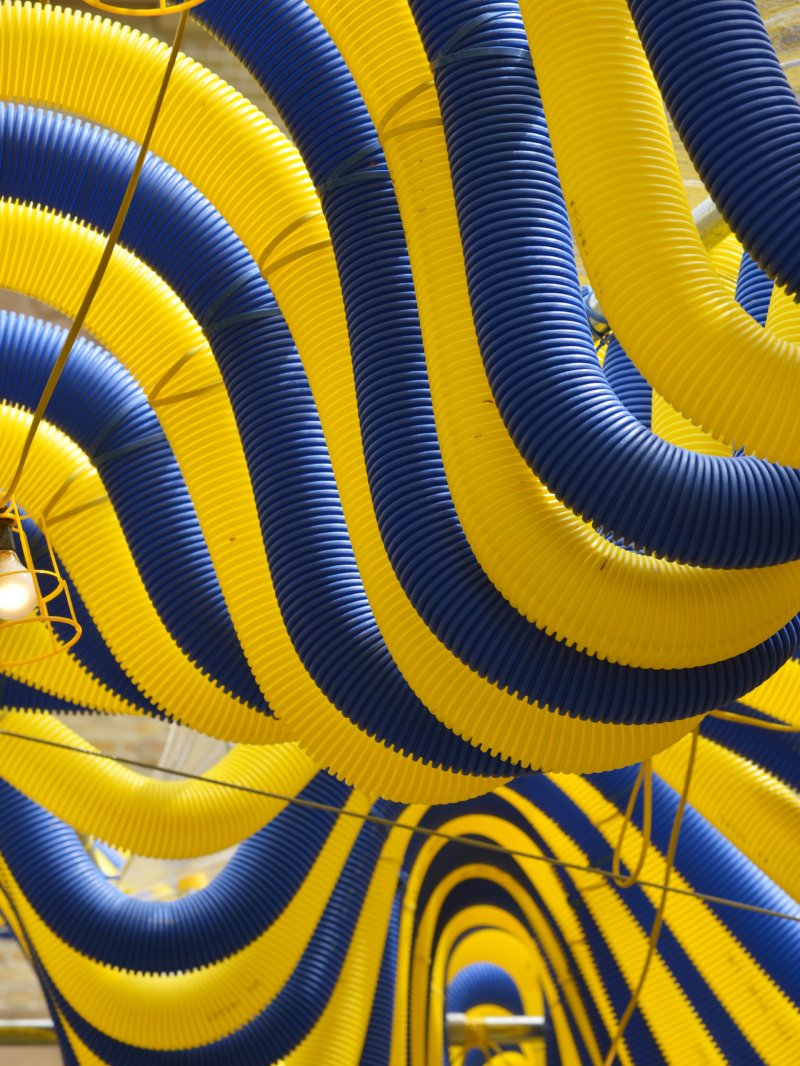